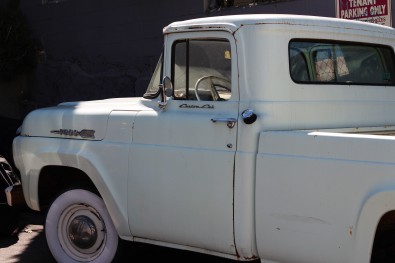 Ford F-100 Pickup spotted parked off the road in Los Angeles, CA. The Ford F Series pickups have been around for decades and this 1959 example is one of the early body styles.

Here’s some info via Wikipedia:

Introduced in 1957, the third generation F-series was a significant modernisation and redesign. Front fenders became integrated into the body, and the new Styleside bed continued the smooth lines to the rear of the pickup.

The cab-over F-Series was discontinued, having been replaced by the tilt-cab C-Series.