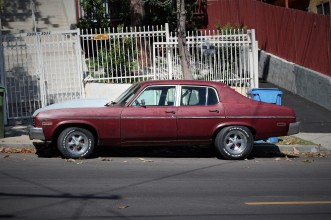 The Chevy Nova, also known as the Chevy II, was a small bodied coupe/sedan that was stuffed with an available V8.  This particular Nova sedan (Third Generation) sports a custom hood, new wheels and what I’m hoping is a Big Block V8 under the hood (but who knows)!  Take a look…

Some info via Wiki:

As with other 1969 GM vehicles, locking steering columns were incorporated into the Nova. Simulated air extractor/vents were added below the Nova script, which was relocated to the front fender behind the wheelwell instead of the rear quarter panel. The 350 cu in (5.7 L) V8 with four-barrel carburetor that came standard with the SS option was revised with a 5 hp (4 kW) increase to 300 hp (220 kW), while a two-barrel carbureted version of the 350 cu in (5.7 L) V8 rated at 255 hp (190 kW) was a new option on non-SS models. The SS option price remained US$312[18] A new Turbo-Hydramatic 350 three-speed automatic was made available for non-SS Novas with six-cylinder and V8 engines, although the older two-speed Powerglide continued to be available on the smaller-engined Novas. 1969 SS models were the first Nova SS models to have standard front disc brakes.

For 1974, the Chevrolet Nova got larger parking lights and new bow-tie grille emblems, as well as modified bumpers that added two inches to length and helped cushion minor impacts. The Powerglide was replaced by a lightweight version of the three-speed Turbo-Hydramatic 350 ( THM 250 ) already offered with the 350 cu in (5.7 L) V8, which was the only V8 offered for 1974. Nova sales continued the surge they had enjoyed since 1972 and approached 400,000 cars for 1974. Six-cylinder Novas were the fastest gainers, as sales of V-8 Novas declined. These were the years of the first energy crisis as Middle Eastern countries cut back on oil exports. After waiting for hours in gas lines and fretting about the prospect of fuel rationing, thrifty compacts looked pretty good to plenty of Americans. Nova fit the bill.