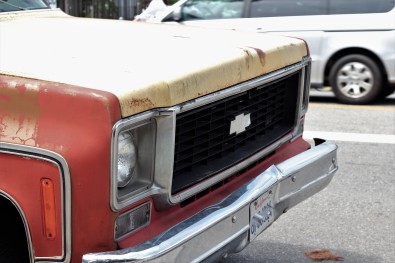 This… this is LA Car Spotting. Rust, faded paint, mismatched panels, dings dents and a lot of character. Why is this the epitome of the ethos of LA Car Spotting? We capture vehicles that are found on the street – most of the time, these vehicles are daily driven. These are not garaged vehicles to be displayed at a museum or pampered by their owners.  A vehicle like this 1973 3rd-gen Chevy C/K truck does what it’s suppose to do – be driven. Enjoy.

Some info via Wiki:

An all-new clean sheet redesign of General Motors’ Chevrolet and GMC brand C/K-Series pickups débuted in mid-1972 for the 1973 model year. Development of the new third-generation trucks began in 1968 with vehicle components undergoing simulated testing on computers before the first prototype pickups were even built for real world testing. The redesign was revolutionary in appearance at the time, particularly the cab, departing from typical American pickup truck designs of the era. Aside from being near twins, the Chevrolet and GMC pickups looked like nothing else on the road. The third-generation trucks are colloquially known as the “Square-body” or “Box-body” generation.