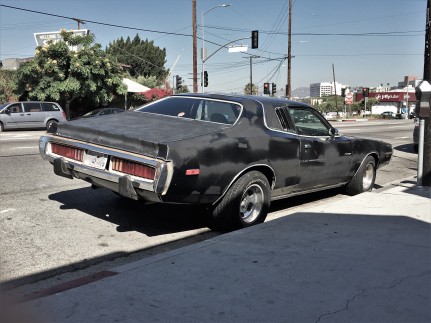 Spotted this hard-to-miss Dodge Charger in Silverlake at Sunset Junction. While it is not the 1970 Dodge Charger made (even more) iconic by the Fast and Furious franchise, this 1973 Charger still demands attention. Looking mostly un-restored, this Charger transports you to a by-gone era of go fast, who-gives-a-shit-about-emissions automotive excellence.

And of course, some info for ya’ll from Wiki:

During the early-1960s, automakers were exploring new ideas in the personal luxury and specialty car segments. Chrysler, fast to enter the specialty car market, selected their Dodge Division to enter the marketplace with a bigger model to fit between the “pony car” Ford Mustang and the “personal luxury” Ford Thunderbird. The intention was to use the mid-size B-body for a sporty car with fastback look while sharing as much of their existing hardware as possible.

For the 1973 model year, Chargers received new sheet metal (though at first glance only the rear roof “C-Pillars” looked different) and were in fact longer, wider, and slightly taller than the 1971-72 cars. Also new were vertically slatted taillights and new grilles. Hidden headlights were dropped, even as an option. The 318 was still standard, with the 340 (available only on the Rallye), 360 (2-barrel only), 400 (low power 2-barrel/single exhaust and high performance 4-barrel/dual exhaust) and 440 remaining as options. The SE models had a new roof treatment that had a “triple opera window” surrounded by a canopy-style vinyl roof. All other models had a new quarter window treatment, discontinuing its AMC Gremlin-style window in favor of a more conventional design. Total sales this year were around 108,000 units, the highest ever for the 1971-74 Charger generation, though more than 60 percent of the cars had the non-high performance engines. The 1973 Chargers, and all Chrysler products, were equipped with 5 mph bumpers, front and rear.